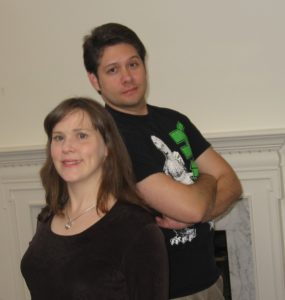 Heather and Rafael Chandler are the masterminds behind Whole Brain Escape, a locally grown business in the heart of Apex, NC. The dynamic duo has devoted their careers to creating interactive entertainment, with over 35 years’ combined experience in the video game industry. Their passion for games and puzzles has extended into the immersive and interactive experience that is Whole Brain Escape.

Heather Chandler (Left Brain) is a veteran producer with over 23 years of experience in the video game industry. She’s led teams at Epic Games, Electronic Arts, Ubisoft, and Activision. Most recently, Heather was Senior Producer on the wildly popular Fortnite. She has also worked on over 35 games including Trover Saves the Universe, Never Alone, Star Trek Rivals, Kingdoms of Amalur: Reckoning, and several games in the Ghost Recon series.

Heather was recently selected to be an If/Then Ambassador for the American Association for the Advancement of Science (AAAS). 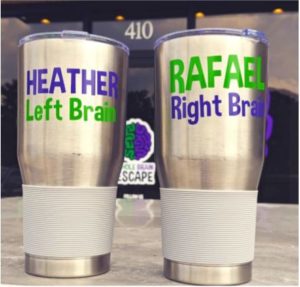 Rafael Chandler (Right Brain) designs and builds the escape rooms. He is a video game writer and story designer, having worked for Sony, Sega, Ubisoft, Kabam, and Gameloft. Rafael has lectured on interactive narrative at the Game Writers Conference, the Montreal International Game Summit, and the Russian Game Developers Conference in Moscow. In his spare time, Rafael writes novels, including: Mask Beneath Her Face, The Astounding Antagonists, and Hexcommunicated.

Heather and Rafael take great pride in bringing a real-world gaming experience to Apex. They have lived in the town they love for over a decade and are excited to make an impact in the community.

Players from all over the Triangle are invited into their one-of-a-kind world to unlock a good time!

Put down your device and connect with the people who matter most. Whole Brain Escape focuses on providing players with a social, low-tech fun, escape. Game on!

Immerse yourself in a real-life adventure game and work together to solve a mystery.

We invite you to not only escape the room and beat the clock, but also to ditch your screens and devices for an hour!

Bustin’ Out of the Eighties

Seekers of the Mystic Orb

Mystery of the Mad Scientist

Intro to the Rooms

All photos and videos may be used for promotional use. A link to wholebrainescape.com must be given underneath the photo/video.

Connect with Us on Social

We’re Here For You!

Need more photos? Want to interview us? Interested in a unique networking venue or checking out our mobile escape room?